Turns out my weekly recaps did not become a thing as there's seldom enough time for such matters. However, I figured I'd write a post about more significant milestones. Such milestone happened recently as I more-or-less completed practicing my first Rachmaninoff piece and moved forward. The piece in question is Fragments (Posth.). A lovely little piece that I also recorded and might re-record after my piano gets tuned.

Disclaimer: This was recorded a couple of weeks prior to it being ready, so it is not yet completely polished, but I think still one of my better accomplishments as it is a challenging piece that introduces some pretty wide textures and some polyrhythms amid some of the faster parts of it. I might re-record it as a video with the tuned piano just for the "historical" value of it, but I do need to refresh it a bit before doing so.

Anyway, it was one of my bigger milestones as playing anything by Rachmaninoff was one of my main goals when starting out. Everything feels possible now.

I have since started practicing some Chopin; namely Nocturne Op. 15 No. 1 and the Raindrop prelude (Op. 28 No. 15); Both of which I hope to record when the time comes. Currently it looks like the time for the Raindrop prelude will likely arrive way earlier as the Nocturne feels significantly more challenging; especially with the con fuoco- part in the middle. I'm also practicing a couple of more playful pieces, namely Debussy's Golliwog's cakewalk and Prokofiev's Attrape Qui Peut.

I am also looking forward to taking a stab at Rachmaninoff's Elegie Op. 3 No. 1 which is, by far, more challenging than the previous one, but also one of my favorite pieces; perhaps ever. I don't know if it is possible to get to a satisfactory level of mastery on it at this time (or well... when I start in probably a few months time), but people tend to be addicted to the feeling of anticipation over gratification (this is why clickbaits work so well), so I will use this additional burst of motivation and funnel that energy into the Chopin and Debussy pieces which, I should add, are in itself immensely motivating "real" pieces that I want to play. In order to give an example of the kind of motivation I am talking about, I am currently practicing somewhere between 1-2 hours on weekdays and 2-5 hours during weekends, probably averaging around three and a half hours per day. This would be a good rate to reach Malcolm Gladwell's 10,000 hour expert limit in something a bit over 11 years. If I am ever to actually reach that level of proficiency, it will most likely not happen in the next 20 years but it is fun to do the math.

Having graduated to pieces that I actually enjoy listening, I feel like there's some hope for me yet. I have, however, been widely neglecting all composing efforts and almost all improvisation work, which I feel I need to make a conscious effort to include in my practice regimen as the understanding would also, besides the obvious technical benefits, shorten the effort for memorizing pieces. I spend a fair amount of time on watching videos and video lectures regarding music theory, but there's no real substitute for actually getting down to trying to apply it by either analysis or composing.

Anyway, thought that'd make for a good little update on things going on. I don't know if I will be writing more than two updates per year, but I feel like I want to so... maybe.
at October 03, 2018 No comments:

Week 3 was the first active piano practice week of 2018. I feel I got in most of the hours I wanted, aside from Thursday. I also started working on some new material this week; then again, I realize I have not mentioned the liszt of things I'm currently working on so here goes. 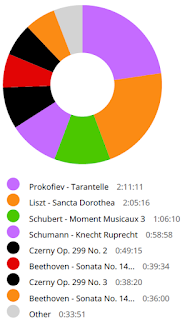 As new pieces / studies, I began working on

I personally feel that I'm probably ready to move on from most of the pieces in the 1st bracket (although the studies I will probably keep as warm up for an extended period of time); however, I trust the judgement of my teacher in this regard and am quite likely to end up doing some polishing on quite a few of them.

Here's a short breakdown of practice time per day (does not include lessons):

This entry is more of a log entry for me to track my progress; I will attempt to have more insights on what and where on further updates. As a big takeaway from this week, I would especially note the realization and implication of alternative fingering for the Liszt piece. I did not realize it before as it was not explicitly stated, but there is a relatively standard case of centering on the second page that I did not construe as such initially. These kind of things happen semi-automatically in a lot of pieces, especially over time when one polishes pieces, but the fact that you can consciously think about where you should be for a certain grouping at what time, it allows you to save practice time for more complicated problems.
The specific scenario was an octave long four note arpeggiation that I could awkwardly reach and was attempting to do so. But simply by dividing it into two groups and moving hand to those positions and to next transition after, the passage became easier and less awkward (one could almost say natural) to play with the left hand; essentially removing the last technically challenging bit from the piece all together. Obviously there are more things to polish there, but all the pieces are there albeit a little crooked.

I also found a new pianist I like Vitaly Pisarenko, never heard of him before, but he plays through some Rachmaninoff quite well and all sorts of Romantic era pieces. Here's a lovely piece of expressive ravel to conclude this week's post.

I have decided to reactivate myself in the writing department. I, however, also decided to concentrate on blogging about my Piano Journey and keeping other stuff to a minimum. Everyone knows how 2017 was for the world and it needs no recapitulating. However, the undeniable beauty of the arts, the satisfactory feeling of accomplishment, progressively growing skill set and sharing knowledge make for a good basis for a more uplifting blogging experience.
I feel like I have progressed in leaps to pieces that I wouldn't have thought possible a year ago (and thensome) when I was recording Dolly is Sick. I am now (my teacher might disagree) at the brink of reaching the level I am comfortable recording for pieces such as Beethoven's Moonlight Sonata's first two movements, Schubert's Moment Musicaux 3 and Knecht Ruprecht by Schumann. Obviously there has been a bunch of other pieces I've breezed through over the year, but I want to establish - for my own record keeping - a base level defined by the pieces I am able to play to a satisfactory degree. I am still quite a way away from Rachmaninoff but solidly progressing towards it.
Besides advancing in technical skills, I am also digesting an immense amount of theory knowledge coupled with additional realizations about technique thanks to my teacher and a few YouTubers (most notably Dr. John Mortensen). I am also living exciting times in my piano "career" for yet undisclosed reasons.
Anyway, as future goes, I will actually be posting my practice data, insights, realizations, links to piano performances and educational videos at a rate of how striking I find either. I will be tagging all these posts with a piano tag so if it does not interest you, one could also filter those out - assuming it is possible to exclude tags.